Harley Topper Fiberglass Body Box (number: 50230-60) was used on the early
Topper bodies in 1960 and 1961 A, AU and in early 1961 on the AH.
You will notice the fiberglass body box has a lot of room for the tool roll and
and many more items.
You can imagine by looking at the picture below, items would fall back into the body
and the taillight plug and wires were exposed.
So if you had heavy items rolling around in the box, it was possible to snap off
a connection on the taillight plug, or if the gas oil mixture can leaked, oil would
make its way all over the back end and around the taillight plug.
The fiberglass body box bolted on to the shield rear wheel and on the frame brackets
also at the rear of the body box the license plate bracket bolts though the body shell and
helps secure the body box inside the body shell.
(Shield rear wheel number: 58900-59 fits: 1960 to early 1961 A, AU.)
(Resin was also used around the top and both sides of the flat rim area of the fiberglass body box
sandwiched together underneath of the body ledge to help secure the box.)
(The Fiberglass Body Box was a factory item.)
You can also see the ring terminals on the early taillight cable assembly which connects to the body terminal posts
inside the body box in the photo below and the large ground ring terminal connects to one of the two bolts
on the bottom floor of the fiberglass body box making up the ground connection to the Topper frame for the taillight. 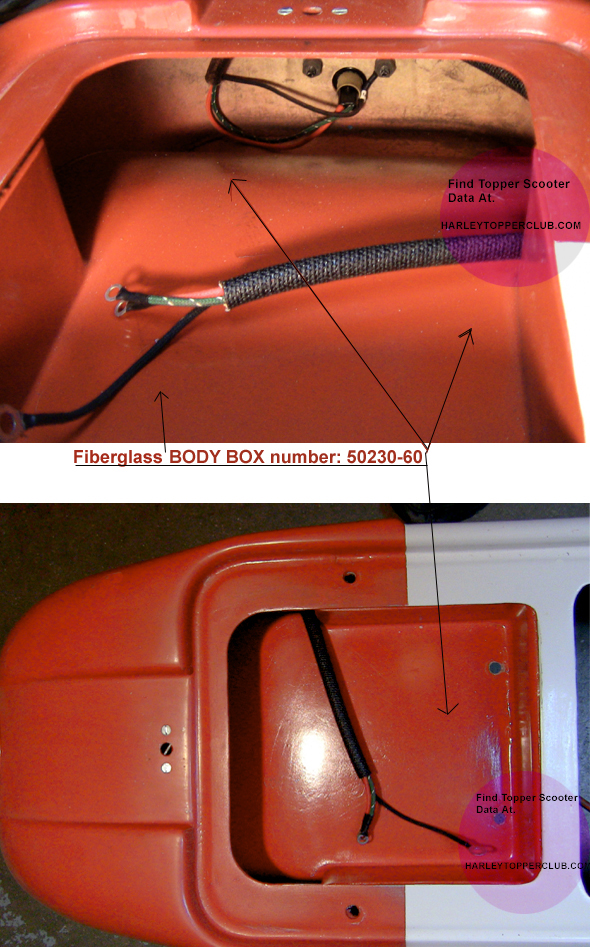 The Harley Topper Metal Tool Box (64201-62) fit inside the body compartment
and bolted to the shield rear wheel, number: 58900-61 above engine number: 61AH-1900.
( Probable around October 1961.)
The metal tool box will not fit over the earlier model body with the fiberglass body box.
With the use of the metal tool box no storage items roll around down inside
to the back end by the taillight wire plug anymore.
The body in the picture below is the 1962 AH.
The metal tool box fit models: AU, AH from 1962 to 1965.
Probable metal toolbox was used on late 1961 models around October
above engine number: 61AH-1900.
The taillight loom positioned parallel with the metal body frame, running underneath the metal
tool box and the loom is found to be secured to the frame with cloth taped or a flat metal buckle strap.
( Two loom locations taped or two metal buckle straps.)
With the introduction of the metal tool box there is no need for the taillight connection body terminal posts.
Around this time a new wire harness was introduced and the taillight and stop lamp cable assembly
number: 70273-62 replaced the previous one.
Bakelite one-into-one female connectors are used with the cable assembly number: 70273-62 joining
the rear taillight cable assembly to the front main harness by means of male bullet connectors
replacing the old harness ring terminal setup at the body terminal posts through the fiberglass body box.